Share a memory
Obituary & Services
Tribute Wall
Read more about the life story of Connie and share your memory.

Constance Louise "Connie Lou" Shacklette Wood was born August 18th,1936, to Elmer & Opal Millikan Shacklette in Strang, Oklahoma. Later the family, including her younger sister, Geri, moved to Lawton, Oklahoma, where her father was in the Army. When the girls were young, the family moved to Colorado Springs when it only had a population of 35,000 people because Elmer was transferred there to help open up what was then Camp Carson, later to become the well-known Fort Carson. While there, she attended Southside Bible Chapel and was involved with the Navigators.

Connie graduated from Cheyenne Mountain HS in spring of 1953. She went to John Brown University in Siloam Springs, Arkansas, majoring in journalism. She wrote for the school newspaper & participated in various other school activities. She later moved back to Colorado Springs and worked at Shepherd Citations.

In 1960, she married Cecil Wood of Blackwell, OK, in her hometown of Colorado Springs. They made their home in Pawhuska, where she was a homemaker. Their first child, Lynne Renelle, was born Oct 11, 1962. Their second, Nathan Timothy, was born August 5th 1970. Connie played softball & coached her daughter’s softball team. In the 1980s, Connie became the church secretary at First Baptist Church of Pawhuska for 5 years.

For enjoyment Connie loved to swim, garden, cook for her family, teach piano lessons, read her Bible, and share the gospel to others. She was also an accomplished accordion player. She enjoyed acting at the Constantine Theatre in Pawhuska and served on the theatre board.

Connie had a great love for Colorado & vacationed there many times with her family to visit her parents. While there, she loved to go visit her Cousin Pearle's cabin in Rainbow Valley behind Pike's Peak.

Connie loved to find treasures at garage sales, she loved the color purple & butterflies. She had a servant's heart, like her Savior, with her biggest services caring for her physically ailing husband who became bed-bound the last 6 or so years of his life with never a complaint but in love. She longed to be a doctor, a nurse, and a missionary, but the Lord had other plans. These ambitions were realized in her son, daughter, and grandson, however. She enjoyed telling people this fact. Understanding she was a sinner, she believed in the Lord Jesus Christ for the salvation of her soul.

She was preceded in death by her husband, her parents, and her sister, Geraldine Naomi Shacklette Peter. She is survived by her daughter and husband (Ron), by her son and wife (Krista) and her 6 grandchildren Caleb Arnold and wife (Sidney), Bonnie Arnold, and Hunter Arnold, Luke Wood, Elisabeth Johnson and husband (Garrett), and Joanna Wood.

To send flowers to the family or plant a tree in memory of Connie Lou Wood, please visit our floral store. 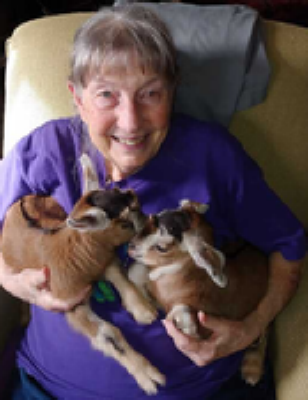